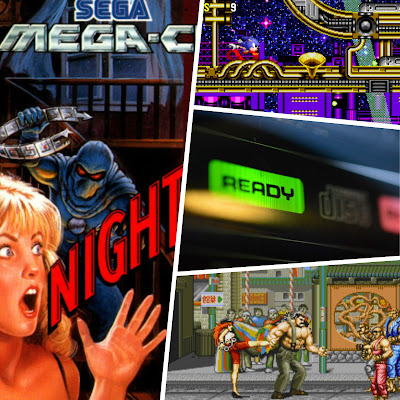 The SEGA Mega-CD was supposed to be the future of electronic entertainment, but what went wrong?

I don't recall that much excitement around the Mega-CD in the UK. However; I do recall being rightly pissed off with Sega for launching the Mega-CD a whole two years after it's initial launch in Japan. By the time I got mine, it was late October 1993... the UK launch price was way more expensive than originally anticipated, and the wait continued until I eventually raised the extra funds. I ended up with a Mega-CD MKII model, but happily handed over my hard earned cash, safe in the knowledge that SEGA couldn't possibly screw things up, in fact thinking about it now, "How did they?". SEGA had brand power, marketing might, and Megadrive established living room space "Surely failure was inconceivable?"

I completely forget how many months had flown by, all merges into one after a while, but I do recall being quietly convinced that sales were looking good. The magazines of the day, weren't spreading any real doom and gloom and I'd already purchased a few games 'Terminator' and 'Final Fight' safe in the knowledge that the Mega-CD had already sold thousands of units within no time at all, so WTF? Things felt kinda rosy to me. I was maybe a year into the life of my Mega-CD, and it appeared as though 3rd party developers were finally starting to gather steam. Good games were finally arriving, but they were becoming difficult to track down, and the likes of Kojima's Snatcher, Keio, Lords of Thunder, Lunar, Batman, Ecco and Sonic CD proved almost impossible to track down.

I think it might have been a Saturday afternoon, I walked into the local video and games shop and searched the entire length but couldn't find the Mega-CD section. I asked the chap behind the counter, and he said that they'd stopped selling the system, games had pretty much dried up and nobody was buying the system anymore. I left thinking he must be mistaken, this was a SEGA console FFS! As the dust settled, then came the eventual realisation that SEGA wasn't at their best, the chap in the shop was right, the console had suffered from a distinct lack of games, some trickled through, but they weren't great. In fact, the games on offer were proving lacklustre at best, Tomcat Alley, The Smurfs and Sewer Shark, I mean cmon! If that wasn't bad enough, we also had to contend with a mountain of re-hashed crap from yesteryear consoles. I hadn't felt this fucking ripped off since buying a GX4000.

In hindsight, the SEGA Mega-CD never stood a chance. SEGA were way too wrapped up clutching at FMV and didn't spend enough time or money on correctly marketing their vision. The high price probably didn't help either, and let's be honest, she wasn't much of a looker. I don't think anyone has ever completely nailed the reason it failed, but it seems to me as though SEGA's marketing team never fully understood their product, collectively displaying all the mechanics of a badly flushed toilet.

As you've probably guessed, I wasn't a happy bunny. My Megadrive to Mega-CD wasn't the stepping stone or experience I'd hoped for, instead, early adopters, myself included had no choice but to sit there and watch SEGA not only kill off its multimedia revolution but to do so with an arrogant and complacent attitude, without the decency of offering up anything like the many gaming memories the Megadrive instilled. History only ever remembers the victor, the MEGA-CD wasn't a case of the Emperors new clothes, it was genuinely something different, felt innovative and in my humble opinion, a massively underrated bit of kit. It had the potential to be a great video games console, packed a punch with its CD-based storage, and the CPU was charged with enough umffph to get the job done. It would have been perfect for Guitar Hero, as the audio hardware rocked. And until this day, I’m still convinced we didn't hear or see the best of it. The Mega-CD could have easily turned out to be the real deal and was even voted 'Best New Peripheral by Electronic Gaming monthly.
90s Arcade Console GAMING Genesis Megadrive Retro Retro Gaming Retrogaming Sega videogames