January 02, 2017
It`s time to roll up your sleeves and fight for your life! Grab those nunchucks, tighten that belt and get your shuriken death stars at the ready.

Meanwhile, back on earth, this article celebrates all those weird and wonderful fighting classics, powered by pixel push and 3D technology! So kick back, grab a slice of pizza and in no particular order... kick some ass!

If I missed off your favourite fighter, it's probably because I never played it, but please comment and recommend all the same. I'm always looking for a good scrap.

The Sega Saturn was butchered by the Playstation, but VF2 (Both coin-op and Saturn version) were the highlight of the 90s 3D proving grounds. Virtua Fighter 2 doesn't get boring, you just improve, with the fight becoming more tactical the further you progress. Master one character and it's back to basics for the next. Virtua Fighter 2 came with a decent roster of fighters, intuitive tactile controls, plenty of secrets to unlock and a two player mode to increase the madness. Even if Sega's console isn't to your tastes, the action, and deep involving gameplay should be.

One of the first scrolling fight games ingrained in the memories of 40-somethings everywhere. Still looks great, plays even better with two players. Double Dragon overflowed with untold hours of action, so don't let anyone tell you it's time to move on, this is an aged but respected fighting game, that still offers unlimited fun.

A technical marvel that included real-time weather, transitions from day and night, held together by a stunningly interactive environment. The game might have have been a bit on the slow side, but the thrill of seeing a perfectly-realised recreation of Japan never leaves you. In Shenmue, everything is fair game, breakable environments, life and death decisions, working at the docks and memorable fighting. Shenmue is a tale of revenge and survival, with the second game improving over the first. Shenmue 3, some fifteen years late, is also imminent.

King of the arcades. King of consoles. King of your games collection. It popularised modern fighting games and had more to learn than the twelve stages of Wing Chun. Dirty and dangerous when you needed it most. Just like in real life, he who trains the hardest normally wins, no button mashers allowed, you will be forcibly removed. Yoshiki Okamoto the brainchild behind Final Fight and 1942, excels here and for a while, this gave way to one of the biggest schoolyard arguments ever, "Was Street Fighter 2 better on the Super Nintendo or Sega Megadrive?".

Who needs Ninja Turtles, this is one of the greatest beat 'em ups to ever appear on a console. Short, sharp and punchy, just like they should be. There's many a walloping you'll need to dish out until the final showdown, but this is easily one of the best two-player side-scrolling beat 'em ups to grace a console. I still can't believe all this is happening on the NES.

This one needs no introduction, feels ridiculous even mentioning it, but here it is, eighties computer combat executed perfectly. It was the closest you could get to the real thing, without a prolonged trip to the hospital. Amstrad, Speccy and C64 all delivered the same fight, but the C64 had a slight edge in the graphics and sound. Never the less, a positive step for the genre and a game I'll never forget.

When creator Steve Brown watched Conan the Barbarian, Conan the Destroyer and Red Sonja, it hit him suddenly, sword fighting games were crap! The same team of people who brought us Cauldron and The Sacred Armour of Antiriad were quickly enlisted, unknowingly they would beaver away at what would become quickly become one of the best hack n' slash games of the eighties. Steve hired the best muscles from Brussels, a scantily clad glamour model, Maria Whittaker from Middlesex and one of the biggest battles of controversy the video games market had ever seen. One reporter described Barbarian as "Exploding Fist with swords". But the technical differences were worlds apart. For example; all the moves were taken from Conan the movie, freeze framed and traced carefully onto gridded paper before being painstakingly converted pixel by pixel onto our small home computer screens. All this came with over forty frames of animation during each level, with upwards of ten or so moves in-game. For those who've never heard of it, think Mortal Kombat, decapitation and finishing moves.

Archer McLean and Rob Hubbard paired up to create one of the most iconic karate games to grace a computer screen. We now had three players battling simultaneously for that elusive black belt. Moves included head butts, split jumps and rolling back flips. That wasn't all, there's also a bonus round which rewarded the player with extra points, essentially fast tracking the player, if he or she deflected all the bouncing balls. Each fighter is graded exactly the same, in other words, the best player really did win.

The moans, groans and commentary still resonate today. Combat feels stiffer than I remember, but the impact and on-screen brutality is still a bloodbath. Mastery of all the characters and signature moves stays with you, but at a cost... Nightmares! Everyone is here, Johny Cage, Scorpion and a few new additions to tear things up. Mortal Kombat 2 is flawless! Probably the best fighter ever... 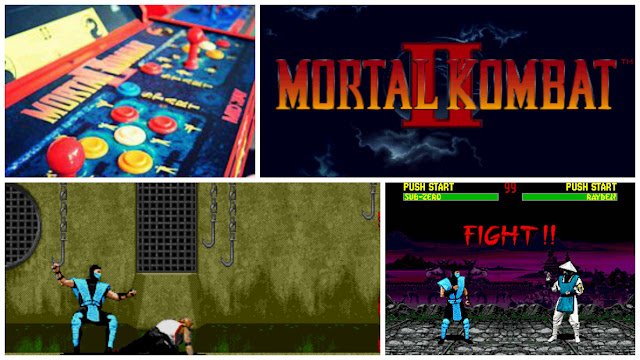 This has to be one of the best fighting games ever released for the Playstation! This is not about button mashing, but mastering button combo's, in Tekken, he or she with the best memory usually wins. You're looking at hours upon hours for true mastery as there's some massively long button presses that almost guarantee you won't get whooped. There's plenty of modes thrown in to help get you there, Tekken 3 provides an Arcade mode, Survival mode and Force mode (The latter a take on Final Fight). Tekken 3 is fast paced, great to look at and highly punishing, especially against friends, the music is outstanding, crazy almost. Tekken 3 is the reason I bought a PS1.

Soulcalibur is like a punch you didn't see coming, the type that flawed Sonny Liston, it's that damn good! Namco really knew how to wow Dreamcast owners, this is surely one of the best fighters ever made, a flagship title for the Dreamcast? Forget decapitations, blood or missing limbs, this is less about gimmicks and more about pure combat and supreme control. A great two player game! 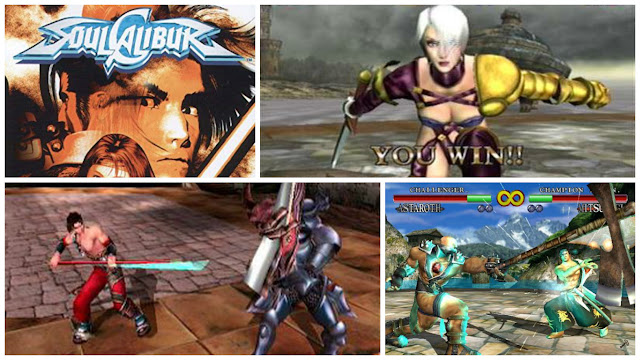